A bulged or a leaking electrolytic capacitor is the best thing that can happen to you. Just look around, see the damaged capacitor and replace it. Easy. But... how to find a bad capacitor still not bulged? Use a capacitor tester and measure its ESR. This is the most logical response I should obtain. It was also my first idea. And I did it. 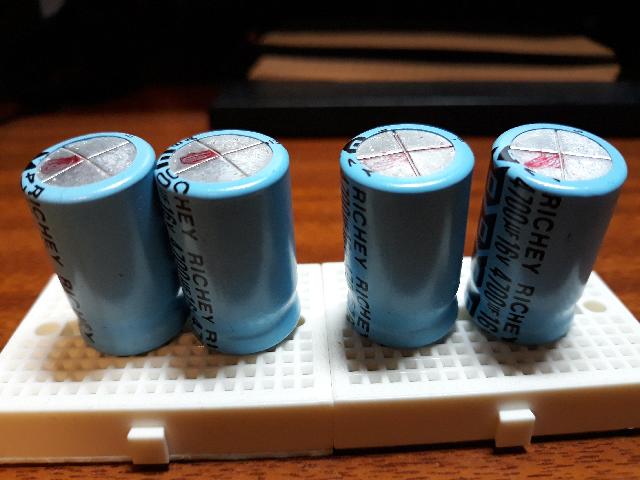 In the above photo you can see four 16 volts 4700 uF electrolytic capacitors from a mid 90s computer power supply. If you look at them carefully you will see two of them are slightly bulged, and other two apparently in perfect shape. I measured all them, from left to right:

Forget for a moment the last column. Would you suspect for a bad capacitor from these numbers? I would certainly not.

The only discordant numbers are the measured capacity. They both are just a little higher than expected, but just a bit. About a 5% higher, a value pretty in the expected tolerance margin of an electrolytic capacitor. The point is that I have measured a ton of obviously bulged capacitors, and all of them measured a higher than nominal capacity. Values around 40 or even 50% over the nominal capacity. I don't know what is the chemical process inside a bulged capacitor capable of fooling the meter but that is what I saw many times.

So, if I see a 50% excess of capacity, I will immediately suspect of a bad capacitor, but with only a 5%, I will not suspect anything. But the first two were bulged... the other two were not. So... Are they bad capacitors? Yes? No? I can't say anything with only that numbers in hand. Because they were 25 years old, and two of them were slightly bulged, I replaced all of them with new ones. This is the safer option with any 25 year old electrolytic capacitor even if it is not bulged at all.

A final note. Because the electrolytic capacitor is the component I most need when I repair devices, I usually save good looking capacitors from devices going to trash and store them in a box. Many times, looking for a capacitor in that box I have found bulged capacitors in it. Those capacitors have bulge in the box, without any voltage applied to them, just while being stored. Probably they were already damaged when I desoldered them, and although they read nicely in the capacitor tester, the bulging process had start, and it seems that once it has started it is an unstoppable process, with or without voltage applied to them.