About the HP E3611A Power Supply

After messing around some time with homemade power supplies and some of them in kit form I decided to bite the bullet and acquire a "real" lab power supply: the HP E3611A.

This power supply works like a charm. It is precise, robust, excellent stability... a real pleasure to work with. But as soon as I started to use it I noticed a small annoyance. Some times at power on, and almost all times at power off it produced a big "plop" in any speaker I had in the room. The "plop" was also heard in RF with a receiver. It was only an small annoyance so I didn't pay too much attention to the "plop".

I was thrilled. I repeated the operation several times and the fluorescent tube tuned on many many times and that was not good. You need a voltage of some tens (hundreds?) of volts to ignite a fluorescent tube and I was using that power supply for some sensitive devices like microcontrollers. I had do something.

Looking for the problem

Then I realized the "plop" was caused by the discharge of the transformer's primary winding (a coil) when the mains voltage was removed. How this voltage spike was present at the power supply output was a mystery for me but I suspected it was through parasitic capacitance in the mains transformer itself.

After some search in books and Google I found a cure can be placing a capacitor in parallel with the primary winding, the one connected to mains. Typical values were around 100-330 nF. I had such capacitors, but none of them was rated X1 or X2, a must for a capacitor connected directly to the mains, so another article caught my attention: the use of MOV devices for the very same purpose. Fortunately I had a ton of MOVs so it was quick to find one suitable to use with the 240 volts AC mains we have here.

The MOV I selected was a SR511K14DS, and after I connected it in parallel with the primary winding I immediately noticed a great reduction of the "plop" but the fluorescent tube still turned on, but fortunately very very dim. This confirmed the problem was the transformer's inductance discharge when the mains was switched off, so I ordered some 100 nF X2 rated capacitors.

As an interesting note: The transformer used in the E3611A does not have terminals for the mains connections. It has wires coming out the transformer and connected directly to the mains switch, so if you want to do this modification, you need to solder your MOV and / or capacitor just at these wires soldering points. 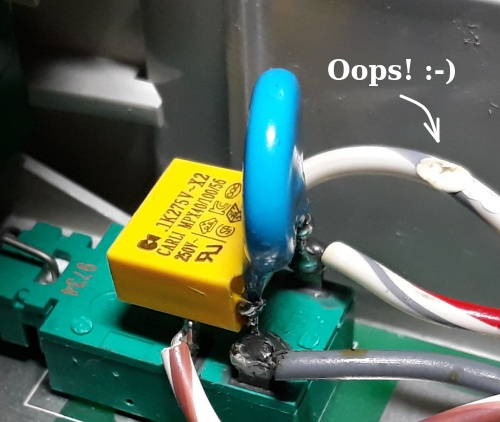 After a few days I received the capacitors and installed one, in parallel with the MOV, and do you guess it? The "plop" was completely removed and the fluorescent tube test did not turned it on at all. Mission accomplished!

It was an interesting case. I don't know how a manufacturer like HP did not take attention to this problems but I must admit I have many devices in my home with transformers connected to the mains without capacitors and they do not produce any EMI disturbance when switched off.

Why the transformer used in the E3611A produces this large voltage spike? I don't know, but a simple 100nF 275V X1 or X2 rated capacitor was enough to solve this problem completely.