Modifications to the Diamond V2000 and similar antennas

This kind of antenna has grown in popularity over the last years because it gives you a decent performance and triband capabilities. But its 50 MHz design is far from optimal. Here you can learn how to improve its 50 MHz performance in a very easy way.

The physics behind the V2000 is very simple. A 5/8 antenna on 144 MHz is almost a slightly loaded quarter wave on 50 MHz. So it is not very difficult to modify the matching network to use the lower 5/8 144 MHz element as a 1/4 wave element for 50 MHz. It's very easy to do. But a quarter wave vertical antenna antenna needs an earth plane to work properly. The V2000 antenna uses a quarter wave radial as a counterpoise for 50 MHz. This is the way its uses to get it working at the three band simultaneously.

There are many antennas working with this principle on the market. Some of them are: Moonraker SQBM-1000, Watson W2000, Comet CX-725 or GP-15 (a good article from K1LH about a similar mod for the GP-15 is here) and of course, the Diamond V2000. This modification have been performed on a generic V2000, but surely it can be done on all the others as well. 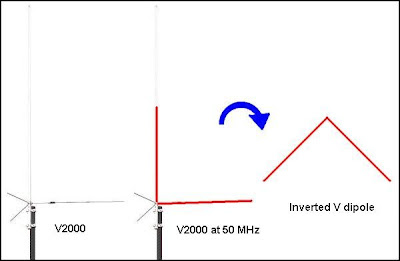 The V2000 and similar antennas have a tuned radial for 50 MHz. Because only the first 144MHz 5/8 element works at 50 MHz, the antenna is not more than a rotated V dipole in this band, a rotated dipole in a way one of its arms is vertical.

The antenna was mounted about five years ago, and it has work always nicely on 2m and 70cm. On 6m I had TV (yes, I still have TV in VHF channel 2 here) noise, sometimes as high as 9+. But it has not been a problem to hear nice signals on the band, of course Es, and some nice TEP and F2. The antenna worked nicely... except if you test it with an antenna analyzer. The antenna had a very erratic SWR curve at 50 MHz, with many nulls between 48 and 56 MHz. The rig's SWR meter shown the same erratic curve. There was no dude the antenna had a problem.

My first try was to adjust the radial length, but the radial was fixed, no tuning possible at all. I tried to tune the antenna cutting physically the radial, but nothing except another erratic SWR curve was obtained. I restored the radial. Here I can't transmit on 50 MHz, so SWR was not a problem at all.

Some time later, playing with MMANA software, I modeled the antenna and I realized what was happening at the antenna. A quarter wave antenna really NEEDS a ground plane to work. Manufacturer do not provided a ground/earth plane for the antenna, only a tuned radial, or counterpoise as it is called some times. The problem is that a vertical quarter wave antenna with only a radial/counterpoise, isn't a vertical antenna. It's a DIPOLE. But it is a problematic dipole:

The dipole does not have balun, so the coax cable and the mounting mast are the 3rd and 4th dipole arm!

This will explain perfectly why the antenna has that erratic SWR curve. Googling a bit, I found a message from JA7UDA stating the antenna is really directive, with the main lobe just at the 50MHz radial direction. This was the confirmation for me that the antenna was really a no-balun V dipole on 50 MHz. 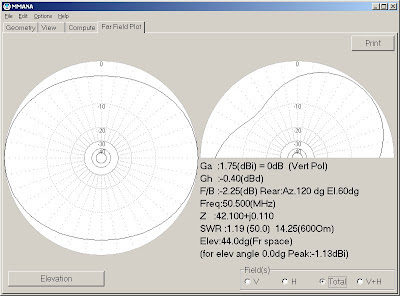 V2000 simulation on MMANA. As you can see, the antenna's lobe is deformed at the 6m radial direction. This is the directivity noted by JA7UDE.


This situation can produce many effects, but for me the principals are:

2.- The polarization of the antenna is also random: Vertical at the radial direction, a mixture of vertical-horizontal at the others...

3.- A dipole without a balun makes the coaxial cable (and mounting hardware in this case) to radiate. This is a real problem!

As a experiment, I replaced all the antenna radials with full size quarter wavelength 50 MHz radials with the hope to convert it to a real ground plane antenna. The radials were made with aluminum tube, a M6 screw and a nut. The total length was 145 cm. More details at the next image: 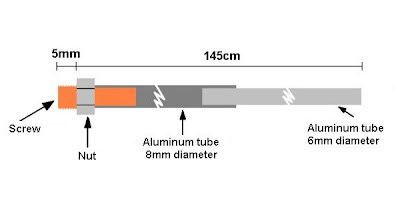 The new radials in detail. This is only one of the multiples choices we have to make them. You can also tweak the antenna tuning adjusting their length. Make sure all three radials have the same length.


Results were much better than I could never expect. The SWR curve is now the one you can expect from a 50 MHz groundplane antenna: 1.00 at 51.080 and 1.4 at 50.000 and 52.000. But for me, the main advantage is the antenna now receives exclusively vertical polarization. This is a great advantage when you are located only 40 Km away from a 250 KW TV channel 2 transmitter!!! The previous TV noise of 9+ is now reduced to S1-S2, and now some real weak signal can be heard, like meteor reflections and multi-skip Es.

No changes were noticed in operation and performance on 2m and 70cm. Just as before the modification. 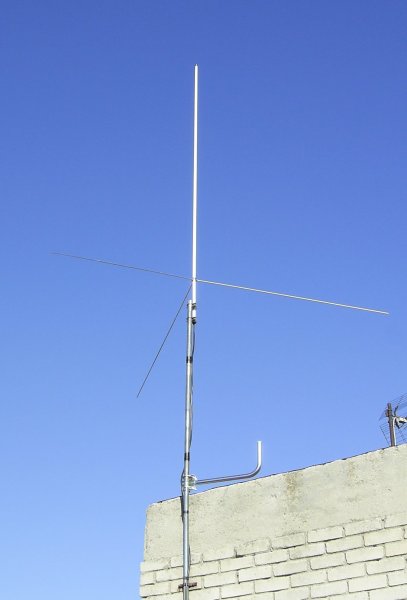 
If you have this antenna, and you are not happy with its performance, try to put a real ground plane as I described here. Its cost is under 15 euros and it works much (and much is much) better than the counterpoise.

On November 24, 2007 we were authorized to use the 50 MHz band, with the TV still on air, so the antenna helped a lot to work some interesting DX because of the high attenuation of the cross polarization. Later on April 9, 2010 the famous EA-TV transmitter (48.250 MHz) was turned off so the band become clean with just the usual urban noise. Using no more than 100W I have been able to work stations in north, middle and south Africa, Middle East, North and South America and of course, all Europe, so the antenna works as expected.

Looking for "V2000" antenna in Internet, you can easily discover there are many "V2000" antennas, with some differences between them. Ones are single piece fiberglass, others are split in two pieces... Electrically most of them are quarter wavelength antennas (the one needed for this mod) but there are other who seems to be configured in a different electrical arrangement. On these antennas the mod does not produce any advantage. In fact it used to produce a lot of SWR and makes the antenna unusable.

What do I mean? There are many chances this modification could improve your V2000 antenna, but there still exists a possibility it will not work you your particular antenna. Anyway I encourage you to test the mod. If it works, the performance of your antenna will be much better. It will worth it.

For the curious, a single piece V2000 teardown can be found here.