After more than two years of almost continuous operation, I started to notify my Radex 1503 reacts to vibrations and fast movements. It was very noticeable while operating the counter in a car, and later I noticed that shaking it, specially in its vertical axis, the effect becomes obvious, getting readings in the 300 - 400μRem/h in just a few seconds. So it was clear there was a problem with my unit.

The first step to attempt the repair is to open the case. It is not an easy task because both covers are glued together. Carefully I applied force to the glued join with a piece of flat metal and with patience I was able to separate both cases. Of course, I made some damage to the plastic cases: They are glued together to be not opened. Once opened, you will notice the PCB is fixed to the front cover by 5 plastic snippets: Two at top and three at bottom. You must to cut them with a cutter to get off the PCB.
When I opened the case, this is what I found: 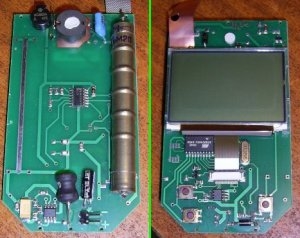 The meter is based around an AT89C4051 microcontroller running at 3.5795 MHz.. There is a switching power supply to get the supply for the microntroller and an oscillator for the HV (around 400 volts) used by the tube. And, as you can see now, there is no doubt: The tube used is a CБM20-1: 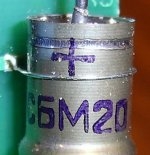 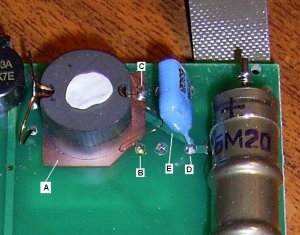 See the photo for reference: The HV ferrite transformer has its secondary winding soldered to points B and C.

Point C is on a small piece of cooper foil.


Over the time, the transformer fixation softens and therefore the contact between C and E starts to be a bad joint, making noise in the HV line, and therefore, producing extra counts.

The solution is easy: Take a small piece of wire and make a jumper between A and D points.

No more counts with movement or vibrations!
Publicado por Miguel A. Vallejo, EA4EOZ en 1:23 AM