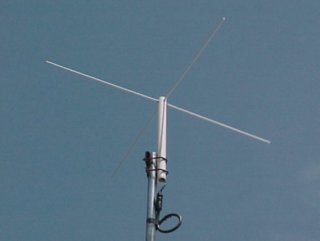 Some time ago my antenna rotator got faulty and I replaced temporally a 9 element Tonna with a small Diamond X-50 vertical antenna. This antenna works nice, but is very limited in tropo VHF DX work because its vertical polarization. Of course sometimes 2m opens widely and you can work some tropo DX with a vertical antenna, but of course it's not a every day occurrence... neither a every year occurrence.

Once inspected, the rotator was dead, so I decided to try a small horizontally polarized omnidirectional antenna. There was some antennas of this kind available, so I started a small research to decide what antenna to build.

The easiest antenna is the closed dipole, or halo. But this antenna have some directivity. To reduce it, the dipole must be made small and must be loaded with a capacitor at the open end. You can get very high voltages on this capacitor, even working with low power. Also the antenna has a very narrow bandwidth and can be weather-sensible. So I discarded it.

The next antenna were the so called Cloverleaf, or Big Wheel antenna. It was very attractive, but somewhat large for me. This antenna would be the chosen one for the 70cm band.

Another option was the Egg beater antenna, or the K5OE's variant Texas Potato Masher. This antenna is used heavily on satellite work. In practice, it has a problem: It needs a section of 100 or 92 ohm coax cable. It's very easy to find 50 or 75 ohms cable, but extremely difficult to get other impedances. So I discarded also this antenna.

But the Egg beater antenna is a improvement of another antenna: The turnstile. This antenna is no more than two perpendicular dipoles dephased 90 degrees to produce an omnidirectional pattern. It also seems to be very easy to construct, so this was the antenna chosen.

The antenna is made of two resonant dipoles placed perpendicularly and phased with a quarter wave coax run to produce a 90 degrees phase difference between the two dipoles. I modeled the antenna in MMANA software, with great success: 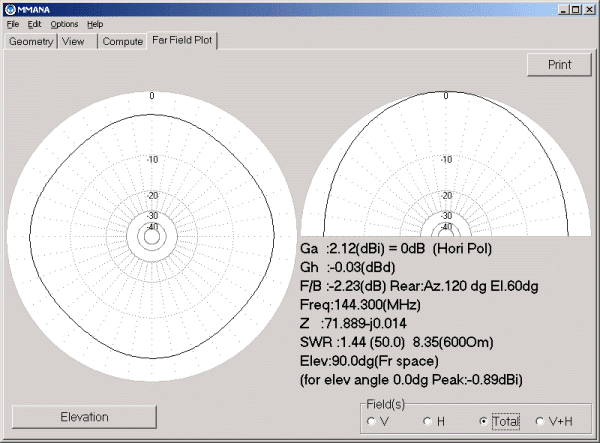 The turnstile antenna in MMANA. As you can see it is almost omnidirectional and the main lobe is pointing to the zenith. The gain at the horizon is -0.89 dBi

The simulation was perfect, but the numbers were not impressive. The antenna has a main lobe pointing just upside and the horizon gain, the one used at DX work, is minus 0.89 dBi. Add a coax cable to your transceiver and you will get easily a -3dBi (or even minus!) antenna gain. Something just a bit better than a rubber duck antenna.

Anyway, I decided to build and test the antenna, because:
In resume, A working VHF antenna, really far away from a 17 element yagi, but a very capable antenna.

The antenna was made with a small length of high pressure PVC tube 35mm wide. At one end, four holes were made to hold the four dipole arms. The arms were made with aluminum tube. The arm had a headless screw at one end. This screw pass through the PVC holes and a pair of nuts secure it. See the drawings for more clarity. 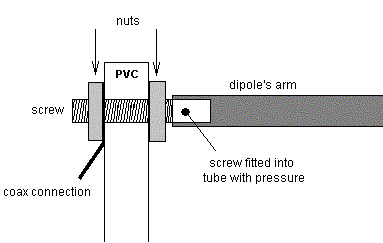 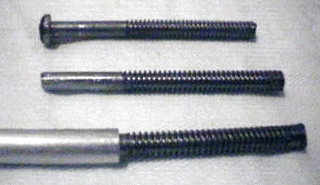 The phasing line was made with a small piece of RG-59 coax cable (75 ohms). Both dipoles where connected in parallel with a (electrical) quarter wave length of coax. Most RG-59 cables have a factor velocity of 0.66. But surprise!!! I have found some cables marked as RG-59, with a different dielectric, that exhibits a 0.78 velocity factor. If unsure, you can measure it easily with a load and a SWR meter. 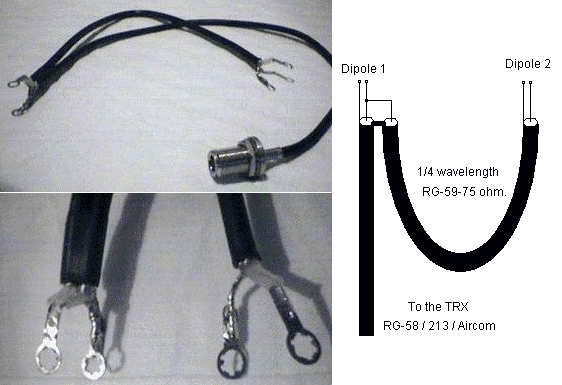 The dipole length was calculated with MMANA to be resonant. The total length (including the gap at the center) was 97.4 cm. The RG-59 coaxial pashing line was cut at 34.3 cm. Please, note the only piece of RG-59 in the antenna is the one that connect both dipoles . All other cables must be 50 ohms cables if you don't want some headache...

The antenna on the air: 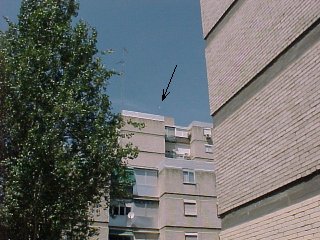 It's a really discreet antenna. The antenna was mounted on July 1, 2002. It's located about 40 - 45 meters over the street level, and it was connected to the transceiver with 35 meters of Aircom Plus. The rig was a Kenwood TR-751, rated at 25 watts, so the EIRP calculated was only about 14 watts. Again the numbers are not impressive.
If you test the antenna with the usual (vertically polarized) signals, the antenna does not work at all. Signals are low, and you will lost many distant repeaters. Local ones will be noticeably weaker. This was my first impression of the antenna. A deaf antenna. But just a small experiment with a local ham and a portable dipole, demonstrated that the antenna was working horizontally.


After some days of testing the first concussions arrived. The antenna works nicely locally if your QSO partner works also with horizontal polarization. Working with tropo signals, the antenna definitively works. I could made some interesting contacts for me, even in meteor scatter. Maybe for you these distances are not impressive. Spain has many mountains, so working at VHF/UHF bands is very very difficult here.

The antenna works nicely on tropo, but it does not suffice with FAI signals. It works really NICE with sporadic E signals, and also for satellite. In fact, my personal record of distance in sporadic E was made with this antenna, 2185 Km with SV-land. I must admit I was very happy with this antenna. Later, I acquired an FT-817, only 5 watts. The antenna also worked nicely with this low power transceiver. In fact, my record in Sporadic E was made with this rig.

I used this antenna for two years. It has two main disadvantages: It has a very low gain and, very important in urban areas, the antenna is somewhat noisy. It's omnidirectionality makes it a noisy antenna. Anyway it is a very interesting antenna. If you have space problems, and yagis are a no-no, try this antenna. You will get surprised!